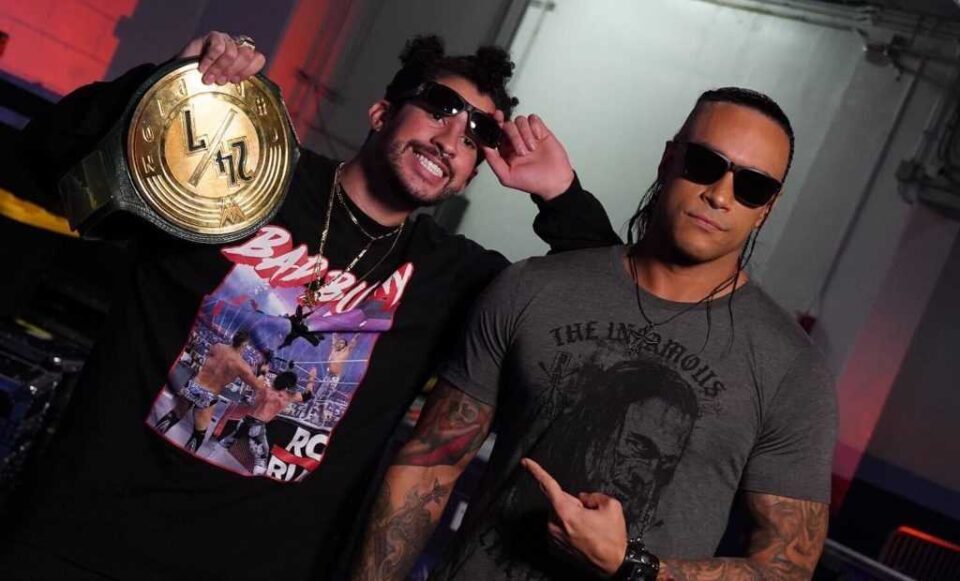 Bad Bunny has been appearing on Raw for several weeks and even won the championship 24/7, what does this mean for WWE and the rapper?

The rapper Bad Bunny is one of the most important characters in the music industry today, he is also a recognized WWE fan, and since the Royal Rumble event, in which he sang his song ” Booker T,” he has appeared in more than one occasion on Raw and even won the championship 24/7.

In recent weeks he has teamed up with a recent Raw brand superstar in Damian Priest to face The Miz and John Morrison, but what does this alliance that has occurred the day after Royal Rumble means.

This union between Latinos meant a “push,” a word used within wrestling to raise the status of a fighter to stellar levels to Damian Priest with Bad Bunny and also a jump for Miz and Morrison, which is worth mentioning, the first has possession of the Money in the Bank briefcase, which means a titular opportunity in the period that he decides until the new Money in the Bank event.

The arrival of Bad Bunny to WWE was performed, as well as promoting their latest music single, helping the company of Vince McMahon with terrible ratings who have had throughout the pandemic Covid-19 both RAW and Smackdown.

Bad Bunny got the championship 24/7 after beating Akira Tozawa in the locker room is to keep the rapper’s participation week by week in the shows. Recall that this championship is not so serious for WWE, it came to give a fresh and comedy touch to WWE programs, since it can be changed at any time of any day without the need for a ring.

Bad Bunny seems to be taking a leading role from week to week, especially on RAW. Miz and Morrison had been lost, and without rivalry worthwhile for fans in recent months. With these last weeks in which they have had disputes, plans could be a tag team match at Wrestlemania to dramatically conclude Bad Bunny’s participation in WWE.

With this fight, as we already mentioned, both Damian Priest could position himself as one of the main fighters of the middle card and a possible campaign for an Intercontinental or United States title. For The Miz and John Morrison, it could mean the popularity that leads them to charge the Briefcase and a stellar shot.

Bad Bunny would not be the first star in a Wrestlemania, throughout history, important characters have participated, such as Lawrence Taylor, a football player; Snooki, a character from MTV shows; Mr. T, television personality to Mike Tyson and Floyd Mayweather.

WWE’s low audiences are worrying the entire company and with the competition getting closer and closer, using Bad Bunny is one of the main keys to return to the high ratings they were used to.

AEW company recently created by former WWE Cody Rhodes and Chris Jericho, in addition to the talented Kenny Omega and the Young Bucks, has represented a threat to the Connecticut company, and with the alliances of companies such as New Japan Pro Wrestling and Impact Wrestling, they could mean lower ratings for WWE.

The freshness that AEW, NJPW, and Impact has given to the world of wrestling, in addition to empowering young wrestlers who did not have a main role in WWE and other independent talents, has marked the success of these companies, which now share wrestlers without a Defined course but that will be marked in the following weeks.