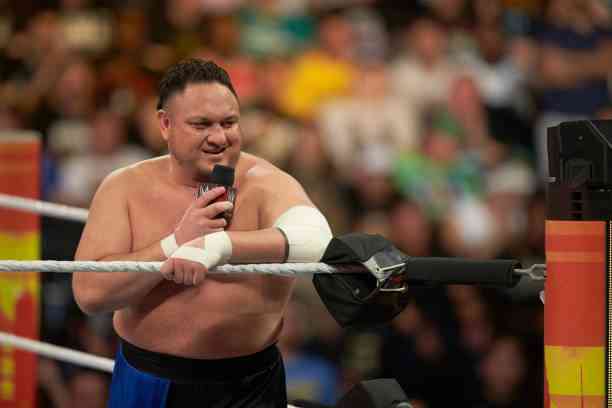 Bad news for WWE fans and the same company, Samoa Joe leaves the NXT title vacant, and they are already looking for a new champion.

It must be difficult being part of the WWE board of directors right now. AEW threatened the ratings, taking several superstars – here we tell you – a RAW that has no direction, and now Samoa Joe has to leave the NXT title, so the brand is left without the main fighter.

Samoa Joe announced this Sunday, September 13, that he would vacate the NXT title and all due to an injury, so the yellow brand – which from Tuesday 14, will no longer be yellow – is left without the main fighter to face the new era of NXT for the immediate future.

Although Samoa Joe’s injury opens the door for other fighters to become an NXT champion, not only that, but also a contender to be the next big star of the brand. But also leaves WWE very weak in the face of the new beginning and rebranding of NXT.

William Regal, general manager of NXT, will have extra work this week for the brand. The show airs on Tuesdays, and this September 14, we will know the fight and the participants to seek to crown the new NXT champion. Get your candidates out, hopefully it could be one of them!

The gap left by Samoa Joe will be difficult to fill, not only is he a historic NXT (the only three-time champion of the brand) but one of the best fighters in the world, so they are difficult shoes to fill. Fortunately, WWE has developed some wrestlers who can take that place.

One of the most popular in all of WWE and someone who already knows what it’s like to be an NXT champion and can easily carry the weight as the main face of the brand. Unfortunately, he’s in a story with Indi Hartwell and Dexter Lumis, which runs several months into the run, so they hardly ever cut a story that long so easily.

After leaving the Undisputed Era behind and a long rivalry against Adam Cole, it seems that the future is smiling on him. He began to gain notoriety in headline fights against Finn Balor, and his popularity took off. It could be an interesting bet, he has the talent and quality to be a champion without. In different companies, he has shown that he has what it takes to be the face of a wrestling brand like NXT and easier with the departure of Samoa Joe.

Living his second step in WWE, although the first not so bright. LA Knight is positioned as one of NXT’s top badass, and without a current history on the shows, he’s one of the top candidates. He has the image, the talent on the microphone, and the quality to be an NXT champion.

He was already one of the candidates to face Samoa Joe for the title, and they had hinted at a future confrontation. Now, without Joe in the equation, the NXT championship seems to be closer than ever. He is one of the best pound-for-pound fighters and much loved by the people, despite the fact that currently, his character is badass and would solidify a new alliance with Ridge Holland, Danny Burch, and Oney Lorcan.

He knows what it means to have to let go of a championship due to injury, but he also knows what it takes to be the NXT champion. His reign was one of the most attractive and in this 2021, the title of the brand can add an extra ingredient to the rivalry with Pete Dunne and his group.

Imperium now competes in NXT, so Walter’s arrival in NXT seems imminent, and what better way to debut with the brand than to be one of the contenders for the NXT title. But, it remains a mystery, because his intentions were not to leave Europe, but a maximum title in WWE could make him change his mind.

What Does The 24/7 Title He Won On RAW Mean For Bad Bunny And WWE?