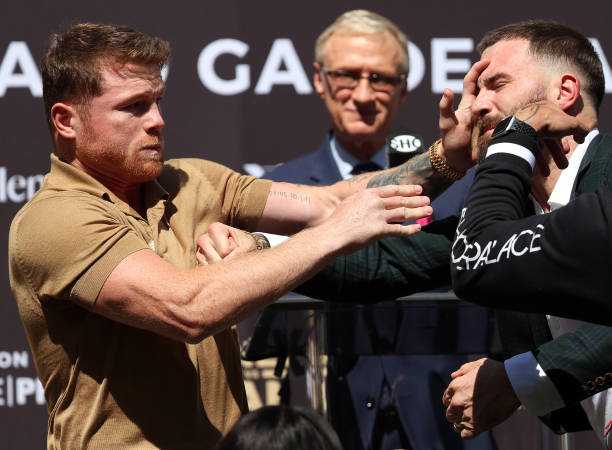 Saul ‘Canelo’ Alvarez has the possibility of making history within the world of boxing in his fight on November 6 against Caleb Plant.

Saul Canelo Alvarez has a date with history in his fight against Caleb Plant. No Mexican, neither the ‘Puas’ nor ‘Dinamita’ Marquez nor the ‘Terrible’ Morales managed to be undisputed champions of the weight division in which they fought.

What’s more, not even Julio Cesar Chavez himself achieved such a mark; that’s how big Canelo Alvarez is about to achieve, of course, if he manages to beat Caleb Plant this Saturday, November 6.

No Mexican has managed to have at the same time, the four belts of the most important professional boxing organizations. Caleb Plant has the only championship that ‘Canelo’ does not have in his possession.

We can put the WBC, WBO, and WBA titles on his personal account, but the rest, the FIB, is the one he is missing. So, if Canelo Álvarez beats Caleb Plant, he would take over all the super middleweight titles or, failing that, Plant could achieve that … On November 6, an undisputed champion will emerge from the Las Vegas ring.

Caleb Plant will have the chance to make history and pull off one of boxing’s biggest upsets. He is undefeated and has the necessary power to surprise Canelo Alvarez, so the Mexican should not be overconfident against the American.

Where to watch the ‘Canelo’ Álvarez vs. Caleb Plant fight?

This November 6, both fighters have a date in the ring. They will clear their differences outside the ring, for Canelo Alvarez this fight has already taken on personal overtones and he even mentioned the round in which he will finish off his rival, HERE we will tell you.

The MGM Grand in Las Vegas will be the scene of the fight, which is scheduled to begin at 10:00 p.m; the schedule is approximate, depending on the other fights of the cartelera, which will start at 7:00 p.m.

To watch the fight, you can tune in to Channel 7. For pay television, ESPN Knockout will broadcast for Latin America, and in the United States, it will be on pay-per-view on Fox Sports.